The Presidency of European Muslim League, the President, Envoy Dr. Alfredo Maiolese, the Secretary-General, Dr. Yvonne Ridley, together with all the members of EML, are glad to announce the nomination of a new Ambassador of Peace of EML, in Venezuela.
Congratulation to Sheikh Kassem Mohamad Tayjan for this important role in his Country. 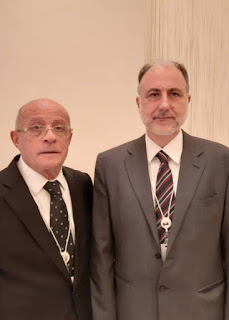 The International Council for Cooperation and Peace (ICCP) established by EML.

The world is facing unprecedented challenges where the perceived threat of climate refugees plus refugees from wars and conflict has reached an all time high. The alarmist rhetoric around these vulnerable men, women and children is coming from not only extreme political groups but some national governments and popular media.
Added to the migratory phenomenon are acts of terrorism which in turn is exacerbating and fuelling problems between different cultures, races and religion all over the globe. Hate, fear and anger are the byproducts and what is often seen on the social networks translates into violence or the threat of it on our streets.
As such the European Muslim League has identified an urgent need to develop efforts for cooperation, social development and philanthropy in a bid to try and bring peace and calm among all peoples affected. The EML has already recognised this problem is a global one and, as such, we've extended our work to reflect that by appointing peace ambassadors around the world.
However we have decided to launch a new initiative to help deal with these crises caused by the prospect of further  large-scale migration as a result of demographic pressures brought about by war, famine, conflict, economic and climate change.
The International Council for Cooperation and Peace will be made up of people drawn from a variety of different cultures, faiths, backgrounds, expertise and nationality to reflect the scale and diversity of those caught up in this unprecedented crisis and to deal with the challenges we now face.
By collaborating with other world organisations and institutions, in order to prevent social conflicts, we hope some of our suggestions to restore peace and calm will be adopted. One of our immediate aims will be to foster friendships across the globe because we recognise that one group alone can not achieve peace and stability; this crisis will need teamwork, tolerance, security and understanding.
ICCP plans to work more closely with religious bodies, influencers and international authorities to support co-existence and dialogue. While interfaith initiatives can support mediation and reconciliation it is also important to bring on board other opinion formers involved in government and NGOs to help develop peaceful counter-narratives, and promote critical (and inclusive) thinking.
We need to stop the angry rhetoric of ‘us’ and ‘them’ which achieves nothing but fear. In ICCP there is no ‘us’ and there is no ‘them’ but only ‘we’ and we are determined our work from the streets of Europe and beyond right up to the corridors of power from East to West will spread the global message of peace, tolerance and security.
We also need new ideas and bold leadership to tackle these multiple problems at the roots but we also need to build bridges across the chasms that divide us. By changing the narrative towards the victims caught up in these crises we will increase trust and slowly but surely will try and stop the judgement of others in terms of race, skin colour or faith.