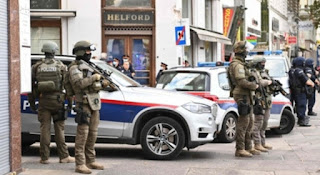 Tonight Muslims across Europe reach out to Europeans of all faiths and none as a cloud of uncertainty and fear hangs over us all.

The European Muslim League echoes the universal condemnation of Monday night’s attack which brought terror to the streets of Vienna.

Before this attack in Vienna, one of Europe’s most beautiful cities and the Austrian capital, had not witnessed such terror for decades.

At least four innocents are dead and many more injured in the atrocity carried out by a 20 year old in the name of the terror group Islamic State, a rogue organisation which every right thinking Muslim condemns.

Our thoughts and prayers go out to the grieving families and the survivors as well as the Austrian people in general. No one should ever have to encounter this brand of terrorism.

“Our mission is clearer than ever,” said EML President Alfredo Maiolese. “We can never allow this sort of terrorism to blight our lives, no matter who we are or how we pray.

“There are those who will seek to sow the seeds of division in Europe but as long as we all stand together, united against all forms of terrorism, the haters in our midst will never win.”

EML Secretary General Yvonne Ridley added: “We stand in solidarity with all people who have lost loved ones in recent days whether in France or Austria.

“Austria had, until now, not experienced the sort of terror which has hit other European countries.

“We stand united as one against the haters. Their violence and grotesque form of fear will be given no quarter. There can be no excuses or justification for this murderous behaviour … nor should the crimes of a deranged 20-year-old be used to vilify and scapegoat others.

“Our thoughts and condolences tonight are with the families of the victims and survivors.”